Yesterday when I was young

Stauffacher place, Zurich (Switzerland), early September 2013: I'm on the tram number 14, on my way home. It's a beautiful evening, late summer - we'll have a nice dinner out on the balcony, as many in Zurich would do on such a day, enjoying the fragrances and happy sounds in the cosy Wiedikon neighbourhood.

The man on the stone bench has a forlorn look in his eyes, watching the pretty young woman rushing to catch her tram, her feet bare on the cobble stones still warm from the sun setting behind the Uetliberg.

For those of you visiting Zurich: just about 20 steps to the left of this scene, there's the Stauffacher branch of the Italian cuisine "Ristorante Molino" chain of restaurants, part of the Bindella Group, to be found in quite a few Swiss cities and towns. Late June 2014 I had a very satisfactory dinner of "Insalata Mediterranea", "Spaghetti al Pesto" and "Coppa Molino", accompanied by their rather good wines by the glass.
© 2013 Joachim W. Schroeter (JoWSch) 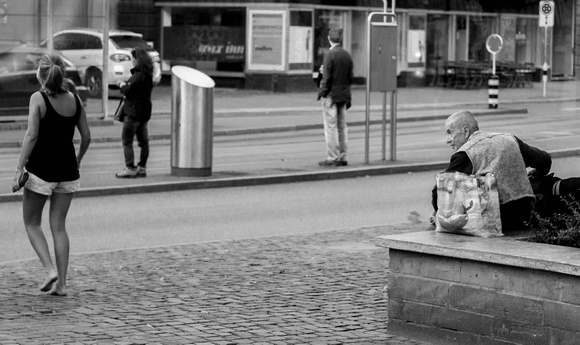