The seagull could have given me a clue, stumbling as it did upon landing, all across the top of the stonewall, almost falling off. No, I hadn't inadvertently locked the rental car's doors. It was two and a half thousands miles' worth of Atlantic wind instead, pushing back the visitors this afternoon in early May 2011. No issues leaving the car by the leeward door, of course ;-)) Almost to be blown away at once, though, just like the seagull a few moments earlier.

Forget tripod - nothing to tie it down effectively. Minimizing my profile instead - shooting over my shoulders; tucking in; crouching low. At a 2000th of a second, still many unusable shots - motion blur, but not the subject's. And thick layers of salty spray on the filter, time and again. This turned out the picture I'm most happy with. Cliffs of Moher, you say? All fine, and also spectacular, but here on Coumeenoole Beach, out on Slea Head Drive on Dingle Peninsula in Western Ireland, you're at beach level, up close, in the sand, feeling the ground shaking when the waves crash at your feet, having travelled unimpededly all the way from North America. An exhilarating place. A photographer's classic.

Giles Norman probably has the definitive shot of this view (go have a look at his online gallery: "LFDIN1010", and watch the seabird between the spikes on the right, just ahead of the incoming wave; or see him in Kinsale, a picturesque town in itself).

And what about "Trasna na dTonnta"? It's an old Irish song (lyrics: http://en.wikipedia.org/wiki/Trasna_na_dTonnta) and also the title of one of my favourite works by Irish painter Cora Murphy (btw, it's great to drop in at her studio in Cork and shoot the breeze over a cup of tea). 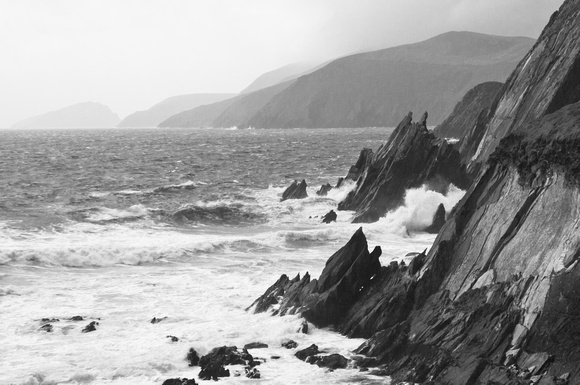